It's nice to know that work is going on to bring prosecutions against people at Anglo Irish Bank. Read Fachtna Murphy's comments here. It's a real pity that it has taken a long build-up of public frustration before any information on the investigation was made public. Anglo Irish has been in trouble since March 2008.
Posted by Eamon Dillon at 13:03 No comments: 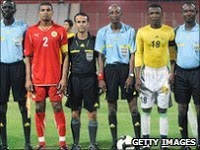 There's been a lot of coverage about allegations of fraud and vote buying at Fifa. One of the allegations include a team posing as the Zimbabwe national squad went on a tour of Asia, funded by a gambling syndicate. It's not the first time a fake team has turned up somewhere. A bogus Togo (pic right) team played against Bahrain while a fake cricket team turned up in Ireland in a bid to beat immigration controls in 2008. Then there was the Spanish basketball team that won gold at the 2000 Paralympics which had ten layers without a disability.
Posted by Eamon Dillon at 14:26 No comments:

The card skimmers are still trying hard to steal people's PIN numbers and card details. Despite better security and a huge drop off in attacks in Ireland this year, it seems there has been a recent surge in attempted skimming attacks at Irish ATMs. According to the Irish Payments Services Organisation there were 60 attacks from July to September this year of which just 16 were successful. Also have a look here at a video showing skimmers putting their spy gear on a machine. Across the EU the number of attacks has gone up 24 per cent but losses have fallen from €156 million to €144 million.
Posted by Eamon Dillon at 17:21 No comments:

It looks like the lawyers are blaming another lawyer, the Director of Public Prosecutions, over the failure to investigate rogue lawyers struck-off for fraud. The chairman of the Solicitors' Disciplinary Tribunal has expressed his 'dismay' at the DPP's attitude. Read about it here. Ireland's dodgy solicitors are being slowly exposed since the credit crunch in September 2008. Read previous post on the topic.
Posted by Eamon Dillon at 13:10 No comments:

This is going to cause a row. Influential UK political blogger Guido Fawkes has come into possession of documents which purport to show that Anglo Irish ripped off its customers. An extra 0.25 to 0.3 per cent was added to the interest rate charges to many of its customers. Guido suggests that Anglo Irish may have made as much as €100 million from the scam. Read the blog post here.
Posted by Eamon Dillon at 14:27 No comments:

Students, tutors and anyone else affected by the Empower Training mess left behind by Stephen Doran and Vivienne Hinton have been invited to a meeting in Langton's pub in Kilkenny on Thursday 21st October at 7.30pm. The plan is to start an action group. In the meantime if anyone has seen Stephen Doran (pictured) let me know.
Posted by Eamon Dillon at 17:11 No comments:

The trade in counterfeit medicine was highlighted today after the Irish Medicines Board released details of Operation Pangea III in which quarter of a million tablets were seized. The tablets and capsules were sold to Irish customers through websites. Mood stabilisers, slimming tablets and products for erectile dysfunction (in other words Viagra) were the most popular cloice. Previously it has been shown that the vast majority, up to 95 per cent, of on-line drugs are actually fake or unlicensed copies. Read previous posts on fake drugs and have a look at this video from Pfizer (don't if you're squeamish).
Posted by Eamon Dillon at 15:17 No comments:

There is a story this week about a private firm, Empower, offering training courses to allow people to qualify in a variety of areas such as childcare, care of the elderly and more. It highlights the need for a different approach to alleged white collar crimes. On the face of it the firm's directors Stephen Doran and Vivienne Hinton have done a runner with a few hundred thousand euros of students' fees. The same company is being investigated over the authenticity of the certs it issued to its graduates and has received over €1 million in fees from the State training body FETAC. It should be possible to freeze their accounts. Instead they are now out of the country and will have plenty of time to move cash around instead of being forced to pay it back to the people who paid up-front to do courses.
Posted by Eamon Dillon at 17:20 13 comments:

People from the motor trade have been warning drivers to be careful to whom they hand over keys. Thieves have posed as garage workers at busy firms and emerge from the building when a customer pulls in, take the keys and drives away with the car. Read about it here. The same scam has been used at car-rental depots at airports all over Europe. When a customer turns up anxious to catch a flight they'll happily handover keys to the guy in the company t-shirt. It comes as a bit of shock when the car company phones up looking for their vehicle. And if you didn't take out fully comprehesive insurance then you got to pay for the car as well.
Posted by Eamon Dillon at 10:26 No comments:

Justice Minister Dermot Ahern made a statement last night on the 'most complex' investigation into Anglo Irish bank . He said 100,000 documents were being analysed and more than 350 people interviewed, but he couldn't say when the probe would be finished. Read more here at Kildarestreet.com. Obviously the Minister has noticed the growing anger over the failure to start rolling up the chancers and criminals who took advantage of the Celtic Tiger light-touch culture - hence the statement (and the fact that Alan Shatter asked the question.) Anglo Irish's share price collapsed in March 2008 and two-and-half years later no-one has been brought to account. Surely the time has come to expand or set up a bigger fraud squad that can get stuck into all the dodgy bankers, auctioneers, lawyers and developers. No doubt Bernie Madoff regrets not being based in Ireland. Read previous post.

Meanwhile the Public Accounts Committee yesterday unearthed that Matt Merrigan and Jack Ryan of Siptu were in control of the bank accounts used for jollies. The full internal report is available at thestory.ie. While the PAC do good work, there's a sense of closing the stable door after the horse has bolted.
Posted by Eamon Dillon at 11:15 No comments:

Midweek on TV3 with Colette Fitzpatrick are running an item on frauds and scams to tonight. As far as I know a pre-recorded piece I did on the subject has survived the final edit. Anyway, it's on at 10pm.
Posted by Eamon Dillon at 19:57 No comments:

IT'S incredible to think someone spent over €2.5 million of tax payers money through a secret slush fund. This week the auditors of the trade union SIPTU said they knew knowing about the grants paid out to an official in the organisation by the HSE. It would be interesting to find out who in SIPTU did know about the existence of the fund which was used for junkets and parties. Officials are expected to give evidence to a Dail committee tomorrow - someone will be shifting uneasily in their seat. Read what Brian Cowen said about it here. Before the same committee today was the new go-getter Financial Regulator Mathew Elderfield (pictured). He made the point that new legislation is needed to allow criminal cases be brought against those responsible for high-level white-collar offences. Read more here. This drip-feed of scandals would have happned if there was proper transparency and if details of all government spending was available on-line.
Posted by Eamon Dillon at 16:06 No comments:

Societe Generale banker Jerome Kerviel was jailed this week for three years. In 2008, around the same time Anglo Irish began to unravel, the French banking giant discovered the rogue trader had been hiding massive losses. Kerviel's gambles eventually cost the bank €5 billion. The Irish authorities work at snail's pace compared to everyone else. Read about Kerviel here.
Posted by Eamon Dillon at 11:05 1 comment:

In recessionary times it is likely that more people in official positions will be unable to resist temptation and start taking 'backhanders' for official favours. Today it emerged that Gardai have been called into investigate allegations of fraud by contractors hired by the government agency FAS, to teach various courses. The system has always been wide open to abuse. Read more here . Two officials in Dublin City Council are being investigated over allegations they issued driving licences for cash. Read about it here. This is far from the first time such corruption cases have happened. Top city officials George Redmond took bags of money in return for planning favours while on two occasions a member of clerical staff at Dublin's motor tax office have been linked to criminal gangs. Then there was the immigration official in cahoots with a Chinese criminal, the prison officer who sold booze, drugs and phones Mountjoy. There was a government official who set up fake dairies that qualified for grants and a Revenue Commissioner who paid out bogus medical expenses claims to his pals. Read previous post
Posted by Eamon Dillon at 18:29 3 comments: 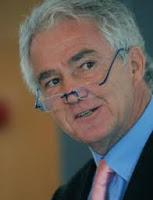 IT is nearly three years since the wheels fell off Anglo Irish Bank, leaving a gaping €29 to €34 billion financial hole. Former chief executive and architect of Anglo's business model, Seanie FitzPatrick, is still enjoying his rounds of golf at Druids Glen. No decision has been made yet as to whether anyone will face charges over the well-known allegations of circular transactions, share price manipulation and disguising personal loans.
In the United States corporate bosses convicted of similar charges are serving long jail sentences. These include Enron president Jeffrey Skilling who got 24 years after his firm's collapse with debts of €31 billion. WorldCom broke all records when they inflated their firm's worth by €11 billion, causing a meltdown that cost €180 billion and put 20,000 people out of work. Bernie Ebbers got 25 years for that. Then there was Tyco boss, Dennis Kozlowskis who got 24 years for using company cash to fund a lavish lifestyle that included a $1 million party featuring and ice sculpture of the Statue of David urinating designer vodka. Anglo only spent €200,000 on golf balls.
Posted by Eamon Dillon at 13:01 No comments: