Home repair scams like this one dealt with in Tralee, County Kerry this week are horrible scams, especially because they target old and vulnerable people. James O'Brien cajoled an elderly lady into handing over €1,700 for €234 worth of work. Don't be afraid about telling pushy tradesmen offering services to go away using forthright language. Look for a business card, because they won't have one. If they do, trying calling the number and if someone answers ask for a written quote - but don't even bother going that far because you will get stung. Tell them to talk to your husband/wife/son/daughter who deals with that sort of thing and is at work now in the local garda station. The spiel will start: "We were in the area (doing some big job) and have some time/materials left over and can give you a good price." It doesn't matter whether it's tarmacking, paving, power-washing, chimney guards, hedge cutting - it's a scam. Click here to read about the best in the repair scam trade.
Posted by Eamon Dillon at 12:11 No comments:

A long-serving civil servant caught with his hands in the till escaped jail and kept his pension this week. Donal McBride (57) claimed €147,000 worth of bogus overtime, but retired early and is paying back the money with his pension. By 2014 the money will have been paid back and he can enjoy life and the rest of his pension. Just to make that clear - he paid back the Department with the cash the Department were paying him. He got a three year suspended sentence today. (Read more here). In contrast immigrant chef Andela Konda who claimed €70,000 while working under a bogus name last year got 18 months in jail for his version of welfare fraud. Surely McBride should just get the basic welfare assistance and the savings on his pension would cover what he took. Konda (40) could have been dealt with differently to save €80,000 a year it costs to keep a prisoner. Then, of course, there's the cost of the legal fees from the trials.
Posted by Eamon Dillon at 13:56 No comments:

Ireland is launching Europe's first 24-hour whistleblower hot-line. Transparency International's 'Speak Up' Helpline will give round the clock advice to would-be whistleblowers. Ombudsman Emily O'Reilly and Minister for Public Expenditure and Reform Brendan Howlin are to do the honours on Thursday evening at Wood Quay. It's a step in the right direction but we seem to have skipped a few other steps altogether.
A replacement hasn't been appointed yet for the job of receiving information from Garda whistleblowers (Read here). Then of course there's the problem of what to do with the information a whistleblower gives up. After all there's a bit of row going on about whether or not the likes of the Garda Fraud Squad have enough staff or whether it's question of needing new legislation. The slow pace of the Anglo Irish investigation, among others, and Judge Peter Kelly's negative comments about it has added to the growing clamour about our failure to hold white collar criminals to account (Read Here).
Posted by Eamon Dillon at 16:48 No comments:

A con-artist in County Clare has taken a couple of business people for a ride after ordering electronics and camera gear posing as the Bishop of Killalloe. The fraudster sent forged letters and then picked up the delivery. Pretending to be a cleric still seems to put people off guard. Prolific conman and sex offender John Cronin was a fan of the collar, regularly donning priestly garbs to blag his way around Ireland and the UK. Then again some people think all priests are fakes anyway.
Posted by Eamon Dillon at 11:30 No comments: 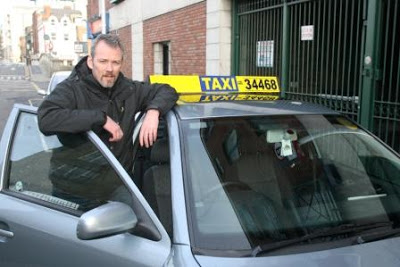 RTE's Prime Time Investigates (click here, broadcast last night) did a nice job investigating how easy it is to rent a taxi in Dublin without any background checks. This is the taxi I got in December 2008 with completely bogus paperwork. There no reason why dangerous sexual predators or other criminals can't still go into the business with a minimal chance of being detected or refused a vehicle.

A plan by the government to target welfare fraudsters who tax new cars sounds like a good plan - it is certainly good PR for politicians and is a nice patch of moral high ground to stop for awhile and be admired by the constituents. It's bit like saying 'drug dealing is bad' - no-one's going to argue. In reality it will be very hard to make it work for the simple reason that the type of dole fraudsters who have €20,000 or €40,000 for a new car won't have any qualms about sticking up a fake tax disc, not to mention being able to use third parties to purchase the vehicle and the tax. Read the story here.
The new boys in government might be better off changing the law to force former Anglo Irish executives to make themselves available to investigators. Their reluctance to face the music is one of the reasons for the slow pace of the probe. Judge Peter Kelly added his voice to the frustration surrounding the case at a High Court hearing yesterday to extend time for the investigation. Read here
Posted by Eamon Dillon at 10:15 No comments: