Here's a straightforward warning tale about leaving personal details lying around the place and using publicly accessible PCs for your email or Facebook accounts. This guy's family were done for €800 while he was back-packing through South America. Read it here. They were contacted with a request for cash believing it to be from their son's friend.
Posted by Eamon Dillon at 15:30 No comments: 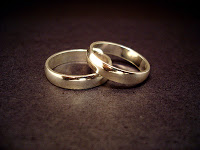 People marry for love, money and passports. An official from the Registry of Marriages came out this week about the increasing number of bogus weddings (read here). Then the head of the Garda National Immigration Bureau explained how (read here) they objected to 57 weddings this year they suspected were bogus. A couple of years ago I did a story on the racket and spoke to an Indian national who said he and his pals were willing to spend up to €8,000 for a convincing wife. It's hard to prove a wedding is bogus but when the bride and groom each need their own interpreter to speak to one another its fairly obvious. One racket saw several Latvian women marry Pakistani nationals, coming over from the Baltics for the weekend and a €5,000 fee. In the Irish midlands several Irish women married African nationals in return for cash. Shane Phelan in today's Irish Independent also wrote a good piece on it, read here.
Posted by Eamon Dillon at 09:01 No comments:

You have to give full credit to Mrs Crump and her buddies for this one. They created fake death certificates and then staged bogus funerals, burying an empty cask, to convince insurance companies to pay out life policies on people who were still alive. They had planned to scam $1.2 million. Read here.
Posted by Eamon Dillon at 20:54 No comments:

More details about the charges of corruption against Fred Forsey jr and race horse trainer Michael Ryan emerged in court yesterday. Former councillor Fred Forsey was arrested after returning to Ireland to attend a wedding in Waterford. He spent the last week on remand in jail until €20,000 bail conditions were satisfied. Forsey has been charged with accepting €80,000 in corrupt payments. He and Ryan have now been remanded to appear in court again on 22 September. Read it here.
Posted by Eamon Dillon at 17:12 No comments:

A story has emerged in Greece about a woman who has made false allegations of rape against a number of male tourists. It is claimed she did this to make bogus insurance claims. The Swedish woman has been described as a serial con-artist in Greek media where the police have been unable to trace her. It is also claimed that she has made €200,000. I find it hard to understand how any travel insurance firm could pay out on a case like this. Read it here.
Posted by Eamon Dillon at 10:15 No comments:

IRISH cops were drafted in to help in a UK investigation against a phishing gang based in the UK. One of the suspects used an address in Navan, County Meath which was searched yesterday. Six people were arrested in the probe, according to reports. The gang were arrested on suspicion of conspiracy to carry out bank fraud. the Police have said they believe up to 10,000 bank accounts and 10,000 credit cards have been compromised. Read here.
Posted by Eamon Dillon at 11:53 No comments:

IRELAND'S cigarette smuggling gangs aren't letting the recession slow them down. Despite record seizures this year, Customs found yet another huge haul of dodgy cigarettes at Dublin Port. The nine million counterfeit Benson and Hedges were labelled with UK government health warnings meaning they were most likely destined for the market in the North and the UK. Business is booming with black-market cigarettes available from market-trader all over the country. Irish punters smoke their way through a billion smuggled fags every year. There are several prosecutions wending their way through the courts system at the moment.
Posted by Eamon Dillon at 11:44 No comments:

This week Ivor Callely came under pressure to resign his Senate seat following the Mail on Sunday's story in which it is alleged he faked expenses claims. So far he has stayed silent but is being criticised across party lines for failing to deny or confirm the claims.
Also this week a former Waterford councillor Fred Forsey (41) was charged with corruption along with a businessmen, Michael Ryan (58). Cops gave evidence how Forsey had been in Australia Britain and Germany while they were trying to contact him over an investigation into rezoning issues. Read here.
But in Italy Silvio Berlusconi is setting the international standard when it comes to politics and scandal. The latest claims suggest the 73-year-old enjoyed the company of three hookers at an 'adult' party in 2008. The media mogul's term in office has been dogged with allegations of scandal, graft corruption and links to Mafioso.
Posted by Eamon Dillon at 12:47 No comments:

The very nice Sinead and Aidan had me on TV3's Ireland AM this morning. Have a watch here. The more people are aware of frauds the better, but don't stay in bed frightened about being scammed.
Posted by Eamon Dillon at 19:50 No comments: