Lifelock's Todd Davis is back in the news again for the wrong reason. In a bid to prove his confidence in his company's ability to protect people from identity theft he used his social security number in advertising campaigns. Now it seems his ID has been stolen no less than 13 times. Read here it in Wired.
Posted by Eamon Dillon at 09:31 No comments: 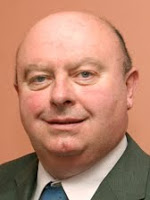 Here's another story from the "You couldn't make it up department" involving Michael 'Stroke' Fahy who was convicted of carrying out a fraud as a sitting Galway councillor (a conviction which he is appealing.) It turns out Stroke Fahy became the target of would-be con-artist who claimed to have evidence that would help him win a previous appeal against the original sentence and conviction. It turns out that Padraic Walsh was peddling nothing but blank CDs in a bizarre attempt to sting 'Stroke.' His asking price of €250,000 dropped to €5,000 before he was arrested. Walsh pleaded guilty last week (read the weird story). But then it emerged that 'The Stroke' had been offered cash by another party to drop the prosecution (read that one here) and the gardai have launched an investigation.
Posted by Eamon Dillon at 17:30 No comments:

THE Good and the Bad 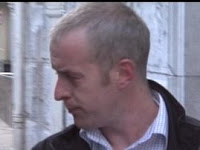 Patrick Browne swindled teenage school kids out of €200,000 when he pocketed cash meant as deposits for events he was organising. Today he got a whopping five years jail, see the report here on RTE. The Cork city events organiser blew the money on a gambling habit back in 2007. The up-side to the story at the time was that the corporates and local businesses rowed in as sponsors to secure the venues for all the various balls. So in the end Cinderella did go to the ball, but Browne never paid back any cash.
Posted by Eamon Dillon at 20:50 No comments:

This is an entertaining article about an attempt to hack into ATMs in the US - and how not to be a con-artist. By using an administrator's code hackers can change the settings on a cash machine so that it dispenses larger denomination notes than requested. The would-be fraudster put $400 on a pre-paid debit card and planned to use it to withdraw $8,000 in cash. His only mistake, apart from not getting the right codes, was to look for help from a convicted con-artist who tipped off the FBI.
Posted by Eamon Dillon at 15:29 No comments:

Convicted gangster Andy Wall and his wife Ellen had assets worth €275,000 seized at the High Court today under the Proceeds of Crime Act. The traveller couple lost a house they had bought in County Kildare for €240,000. Evidence was given that Andy Wall is part of the Cock Wall gang - who are one of Ireland's most prolific criminal gangs. They sometimes would carry out five or six aggravated burglaries in a single night using a convoy of high-powered cars to outpace the police. They were part of a gang sometimes known as the Subaru Gang. (You can read more about them in The Outsiders.)
But Andy Wall also used fraud to buy his house in Newbridge, County Kildare offering the vendor €100,000 "under the table." However once the deeds were signed Wall disappeared with the cash and the vendor was too scared to make a complaint. The scam only came to light when an investigation was carried out by the Criminal Assets Bureau. The fear was understandable considering he has served time for shooting a man dead who he had wrongly thought had run over his brother. Read about more about him here. The scam is reportedly used regularly by cash-rich members of the Rathkeale traveller clans. The ideal victim is someone going through a divorce who thinks they hide the cash from their ex.
Posted by Eamon Dillon at 20:56 No comments:

On the face of it the News of the World's investigations editor Mazher Mahmood has pulled off another scoop with snooker's world No.1, John Higgins, apparently agreeing to fix games for cash. Higgins and his agent Pat Mooney claimed they were set up and that video tape was edited. They claim talk about game-fixing (at a meeting Kiev) was in relation to letting local guys win a frame or two in exhibition games and they felt intimidated by the NoTW undercover reporters who gave the impression of being mafia. There's some analysis of the story here. Also have a read of Roy Greenslade's thoughts about Mahmood here. Mahmood was the reporter who unveiled a plot to kidnap Victoria Beckham. Everyone arrested over the abduction plan was eventually released. Then again Mahmood has done some superb undercover work during his career. He gave an interview to the UK's Press Gazette here. Also NoTW have stood by the story and say they have more information to run next week. Read their statement following Mooney's denials and watch the video here.
Posted by Eamon Dillon at 22:15 No comments: