It looks as if after four years the investigation into Anglo Irish Bank is coming to an end. RTE have reported that ex-finance director Willie McAteer is in custody with a view to being charged. More arrests and charges are expected. Read RTE's report here.
Posted by Eamon Dillon at 12:07 1 comment:

Buried under a portacabin an underground bunker was set up to print large quantities of good quality fake banknotes, according to investigating officers. Accessed through a hidden trapdoor, a lot of effort was put into the hidden print shop in County Laois, Ireland, which, according to one of the accused men, was for printing greeting cards. Today, the trial of of four men accused of running the operation collapsed at the Special Criminal Court after it emerged information about a fifth suspect had been kept from the defence. The information was kept back because the person involved felt their life would otherwise be at risk, it was claimed in court. Early in the trial evidence was heard that images retrieved from a printer revealed images of €50 and €500 as well as US dollar bills. It is still possible that the US Service Secret could take an interest in the case. The agency, famous for their role in protecting the US president, is also responsible for protecting the nation's currency. Read RTE's coverage here.
Posted by Eamon Dillon at 15:20 No comments:

You can't trust anyone these days. Rogue traders presenter is jailed for fraud

No doubt there's a couple of dodgy builders and rogue traders having a little chuckle to themselves over the news that former Rogue Traders presenter Dan Penteado has been jailed for benefits fraud. He is facing 12 weeks behind bars after being convicted of claiming the dole while filming the series with the BBC. Read here for more. Still, the excellent work done by the programme stands on its own merits.
Posted by Eamon Dillon at 15:34 No comments: 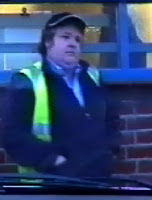 Tommy Connors was found guilty of slavery today in which he and members of his family forced destitute men to work. The verdict at Luton Crown Court came after a 13-week trial. Three other relatives were also found guilty. Connors has previous form having being jailed for money laundering in the past. He also won the distinction of being the first person to be subject of a court injunction to prevent him for touting for building work. It came after an investigation by trading standards officers in Enfield Borough Council in London. The rogue builder regularly fleeced unsuspecting homeowners as well as botching roofing and paving jobs that costs thousands to repair. Tommy senior went through another lengthy 11-week trial in 2007 in which he faced 73 charges, including money laundering. A court order was later made ordering the cowboy builder to pay back£1.5million (€1.8m) in compensation. He is part of an Irish traveller clan known as the Peacutter Connors and has used his background to excuse his prolific criminal behaviour.
Posted by Eamon Dillon at 16:48 No comments:

Introducing himself as Mark, a man is calling retail outlets claiming to be an engineer fixing a fault with their card payments systems. He persuades them to re-fund cash to what he claims is a dummy card - needless to say, it's not a dummy card. The Irish Payments Services Organisation have said that a variety of firms have been caught out by the fraudster. Read their warning here. It is not the first time point-of-sales have been targeted by sophisticated con-artists. In another scam a con-artist turned up in shops to replace credit card terminals. They were replaced with ones that had a mobile phone device to send customers' card details back to the con-artists who could then create clone-cards for use anywhere in the world.

Posted by Eamon Dillon at 14:47 No comments:

Irish tarmac con-artists taking in up to €20,000 a day in Italy and Poland. 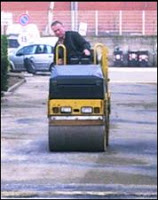 One gifted teenage hawker who can speak French, German and Italian is setting up as much as €20,000 worth of tarmac jobs every day. In Italy they are known as the Asfaltari Irlandese, in France they are the Faux Bitumeurs, while in Germany people are increasingly aware of the notorious Teerkolonne. Part of a Rathkeale traveller-trader family the youngster works with his dad, employing Irish and Polish labourers to lay down tarmac. The jobs are shoddy and done for hugely inflated prices. One former worker explained how they use their workers to set up bank accounts, cash cheques and withdraw money. The kid got an E-Class Merc or his birthday even though he is too young to hold a licence. At best the tarmac surface will last about two weeks. Read a previous Sunday World story on the tarmac crews here
Posted by Eamon Dillon at 16:12 No comments:

A man lunged at Gardai investigating allegations of fraud at a HSE-run hospital in Cork today. Officers had to use pepper spray to subdue the man as they seized a laptop and documents in the probe into allegations of fraud. It's claimed that cash was paid for non-existent work ans bank accounts. Click here for RTE's full report.
Posted by Eamon Dillon at 21:15 No comments:

Tonight Channel 4 news showed how fraudsters can exploit loosely controlled finances in public bodies. Although the report centres on the UK I'm told that similar attempts have been made to con Irish institutions out of cash. Cops in the UK are calling it Mandate Fraud because so many cases have turned up. Essentially it's a form of identity theft in which institutions rather than individuals are being targeted. Watch Channel 4's report here.
Posted by Eamon Dillon at 21:04 No comments: