Dale Farm and the Irish traveller connections Down Under 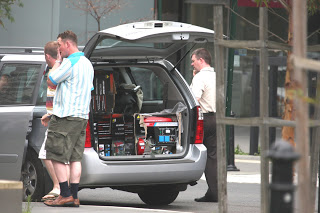 Putting aside the rights and wrongs of the planned eviction of Irish travellers at Dale Farm, more than few individuals with addresses at the site have been part of scam operations around the world. Crews of Irish travellers sparked a nationwide alert in Australia in 2008 selling dodgy electrical generators at inflated prices. (Pictured) Trading standards officials discovered a number of the men involved, all Irish travellers, gave Crays Hill and Dale Farm as their address. One group included Danny ‘Bishop’O'Brien and Michael Hegarty from Rathkeale, who have since been written to by the Australian authorities warning them not to come back. Back in 2004 James Gammel also gave the Essex site as his address when jailed for cigarette smuggling in Belgium. He was one of three Rathkealers jailed including Richard ‘Kerry’ O’Brien junior, recently convicted of rhino horn smuggling in the United States. His cousin, also named Richard, has emerged as the only male spokesman for the traveller sat the site, although there has been little mention of his own convictions for tobacco smuggling. Dale Farm has been described to me by Rathkeale travellers as “a come and go place” but the Basildon council have really tied themselves up in an expensive knot on this one.

Cop killer suspect stays out of reach in the United States →

Irish Travellers in the United States do their best to avoid the limelight. →